Accepting the baton from Late Sri. S. Koteswara Rao, Mrs. S. Swarajya Lakshmi, with her indomitable spirit to uphold his vision and mission, is inspiring, approachable, and renowned in professional circles for her passion for teaching. An academician who has had the privilege of being not only a life partner with esteemed of Late Sri S. Koteswara Rao but also a partner to his visions and missions in all his educational ventures.

Critical thinking is the art of analyzing and evaluating an idea to improvise it. Instead of accepting "at face value," what you read or hear, critical thinkers look for evidence and good reasons to believe it. This is at the heart of what it means to be a scientist, researcher, scholar, or professional in any field. Whatever you are studying, critical thinking is the key to learning and to make progress..

Question words – “What, Who, Where, When, How and Why” will help the learner to get started, along with the phrases – “What if, What next, and So what.” Attempting Description, Analysis and Evaluation.

Teachers and Parents, it is our responsibility to motivate, inspire, and guide children to cultivate 'Critical Thinking.'

As a well-cultivated 'Critical Thinker,' children will raise vital questions, formulating them clearly and precisely, gather and assess relevant information and interpret it effectively, come to well-reasoned conclusions and solutions, think open-mindedly with alternative systems of thought and communicate effectively with others in figuring out solutions to complex problems. This entails 'Effective Communication and Problem Solving Abilities', which is indeed the need of the hour.

‘The Holistic Approach,’ at Vikas-The Concept School, is not only catering to this but also is making learning interesting and meaningful for learners. ‘Critical Thinking’ takes place in various disciplines and learning to think out of the box will become a ‘Habit.’

Dr.C.Ravi Prasad, Ph.D, M.Phil, B.Ed, took over the onus of leading Vikas The Concept School towards achieving its cherished goals as the Principal in 2009. Prior to joining Vikas The Concept School, Mr.C.Ravi Prasad was the Principal Incharge and Senior Headmaster at The Velammal International School (CBSE) Chennai.The philosophy of providing creative, intellectually motivating, yet stress–free and non-competitive, child-friendly, holistic education is very close to his heart.

Being a passionate teacher he started his career as a lecturer in Chemistry in a junior college in 1987 and worked upto 1993.His inner search to be an administrator led him to become the Asst. Headmaster, at Akshara School (CBSE) Kakinada for a decade from 1993 to 2003. Thereafter, he became the Principal of Aditya IIT Talent School, Rajahmundry for two years from 2003. His next experience was at The Velammal International School (CBSE) Chennai from 2005 to 2009.

Mr.C.Ravi Prasad is a dedicated, resourceful, education professional with proven ability to create and monitor policies and practices that promote a safe learning environment; ensuring a school culture that encourages continuous improvements for teachers and students; developing an environment that fosters open communication with colleagues, students, and the community; mentoring educators in the creation and implementation of class instruction, lesson plans and student assessment in conjunction with state learning regulations.

Mr.C.Ravi Prasad has attended several conferences on school education and management in India and abroad both as a Resource Person and as a participant. As a resource person he has conducted a number of workshops, to mention a few are : Teacher! Are you creative?; What Smart Teachers do When Dumb Things Happen?; Why Enriched/Integrated Curriculum in Middle Schools?; “Complete English” in Six Hours etc.

He was the Secretary of HSSC (Hyderabad Sahodaya Schools Complex 2017 - 18) and the Clusterhead (2016 - 18) of CBSE Saptarshi Sahodaya BHEL Cluster - Hyderabad, Member of Inspection Committee-CBSE, New Delhi, Head Examiner CBSE in the Subject Chemistry; apart from being an advisor to schools in Hyderabad, Kakinada and Nellore.

To mention a few feathers in his cap, he is the recipient of "Avantika Swami Vivekananda Samman Award-2015" and the "Acharya Devo Bhava" Award – 2014. The Academic Council Of Science Olympiad Foundation(SOF)has bestowed the award of "THE BEST ZONAL PRINCIPAL Telangana and Andhra Pradesh for the consecutive years 2016-17 & 2017-18.

In him, we have a hands-on Principal who contributes to the life of the school not only in academics but also through a variety of other activities in the fields of art, theatre, culture, sports, adventure, and community service. 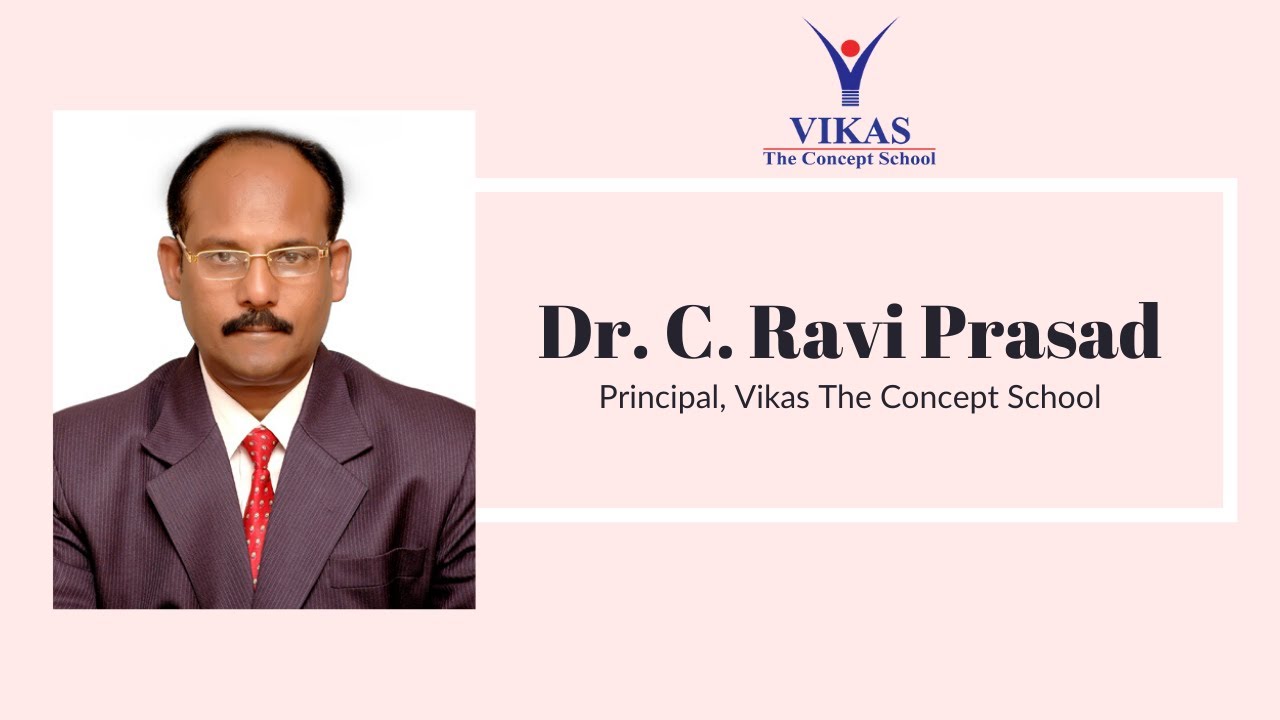 I am a proud parent of two Vikasians who are being moulded beautifully by the school. This is a place where my children are learning more than just academics. I must admit that the extra- curricular activities which are part of the curriculum helped to build their social and communication skills. I am happ...y that this year Vikas has moved a step further to keep the parents updated through their portal and mobile apps. I am very grateful to the dedicated teachers and staff and pray for the school. I wish that the school continues to give the BEST and bring out the BEST.

Vikas has played a crucial role in teaching and shaping the lives of the students. Vikas offers an excellent platform for every child to thrive not only in academics but also in various co-curricular activities. Vikas has everything that any parent looks for in a school- visionary management, qualified and em...pathetic teachers, exposure to various co-curricular activities, and, most importantly, a conducive environment for the development of their wards.

My daughter had an incredible lifetime journey at Vikas -The Concept School from her Pre Primary, LKG, till her Higher Secondary, 12th. The school has been majorly responsible for her being groomed into a beautiful personality. I remain indebted to the institution for having made her what she is TODAY. ...

It gives me immense pleasure to have both my children as a part of this school. The thing I liked the most is that the school is ready to provide support and solve issues if any. It facilitates adequate importance on co-curricular activities along with academics. ...

Entrepreneurial Education for our learners…

VIKAS - The Reputed One

"The reputation of the school rules. Knowing that The school offers programs that are based on various time-tested techniques and

The School you are looking for!!!

To provide a solid foundation in academics, need to think progressively. Children deserve the very best education at primary, secondary

Get an Admission in India's best CBSE school.